LOVING THE SKIN YOU’RE IN: VITILIGO AND ME

Most people struggle through life ignoring, compartmentalizing, or covering up insecurities. Vitiligo challenges that.

Vitiligo and I have had a fraught relationship over the last few years. Although I have always embraced the splendour of human diversity, when life threw me this curveball – a visible difference that I had no control over – my thick skin was punctured by what would come to be a psychological and emotional rollercoaster.

I have segmental vitiligo; symmetrical patches of ‘discoloration’ cover my body, ebbing and flowing across my skin. It’s a gut-wrenching condition that changes your life. Preserving self-love in the midst of this tumult shook me to my core.

I learned I had vitiligo at 17. They were innocuous, small white islands surrounded by tanned sand, no pain or discomfort, but I needed to know what was happening. I was told it was not fatal and not to be vain, handed some creams, and sent on my way. The initial treatment plan the British public health system offered was inadequate and lacking in empathy. When I sought alternative remedies, I was warned it was like witchcraft.

My vitiligo accelerated at a time of great transition and stress in my life— leaving university and trying to figure out who I wanted to be. I’ve always had a layered relationship with my ethnicity. I have olive skin and African features but dead straight hair. I am of mixed heritage with an English mother and an English-Irish-Nigerian father. My complexion was my marker of being mixed, it elicited curiosity from others but I felt confident in my skin. The emotional firecracker that exploded seeing large patches of skin turn lighter was all too real, and made me realize how hard it is to break out of the boxes I (or others) placed myself in.

Something else changed with the rapid spread of my vitiligo: I was introduced to uncertainty.

I suddenly became hyper–aware that, although I had choices, I was getting a crash course in life’s unpredictability. Not having command over my changing appearance meant I couldn’t control a big part of how people saw me, a power I never realized I had until it was taken. I became fixated on the ever-changing shades of my skin.

I refused to be helpless. The ‘there is no cure’ mantra threw me headlong into researching treatment options. I believed my vitiligo, like my thyroid condition, was connected to some imbalance in my system. My skin had become an external metaphor for everything happening inside— mind, body, and soul. As the patches developed on my hands, my elbows, my feet, neck, and finally my face, my body didn’t feel like it was mine any more. I felt vitiligo was changing me, inside and out.

Most people around me struggled to grasp the trauma I was experiencing. When your partner, best friends, and even family can’t understand the pain you’re feeling, why should anyone else? My younger brothers were always the most understanding, making me feel beautiful and valued and never underestimating my feelings and frustrations. But I was riddled with guilt for feeling how I did and, because of that, vitiligo became my everything for a long time.

Often, people didn’t notice the changes and when I shared my feelings expecting some sympathy, I instead got, “if I had it, it wouldn’t bother me so just don’t let it bother you. It’s just what you look like, it’s not important. I don’t see it.” In those moments my distress was compounded and I felt more misunderstood than ever.

With these responses, I was introduced to the idea that having vitiligo is nothing.

However, as I heal, I’m slowly coming to the understanding vitiligo is nothing, in that it does not affect my physical health. It’s a matter of mind over body. It’s about negotiating the ache of the unpredictable feelings that rise between my belief that vitiligo is both everything and nothing. Thinking about my skin every day has drained me, depressed me, held me back, and taken some of my magic.

Vitiligo has forced me to look beyond my reflection. Does my response to my vitiligo indicate a failure of character? Over the past 18 months, being frequently in hospital for UVB phototherapy and surrounded by people who were very sick or with life-threatening conditions has made me question the purpose of my treatment. What was I hoping for? Having worked for a decade in fashion I could not shake the feeling I had been dragooned into buying the beauty standards fed to us. Or, was I trying to cure some other emptiness beyond my skin?

I have now arrived at more tranquil shores, armed with information after exhaustively researching alternative medicine, holistic approaches, and supplements. I take a strict combination daily and this open approach has, I believe, stimulated a dramatic improvement on parts of my skin. I am learning to accept my vitiligo as my mark and part of my story.

Most people struggle through life ignoring, compartmentalizing or covering up insecurities. It’s easy and sidesteps hard work. Vitiligo challenges that. You either stand tall and transcend every belief system regarding what we should look like and truly believe you are more than the skin you’re in, or you suffer in silence. I have started to create a life of my own definition, I am becoming wiser, more compassionate, and more loving.

Between the two extremes of everything and nothing, I have been reminded to love myself. As I make sense of life and work towards finding true peace between my outer shell and my inner soul, I am content in knowing that although vitiligo is part of my exterior, it does not define my being, beauty, or future. 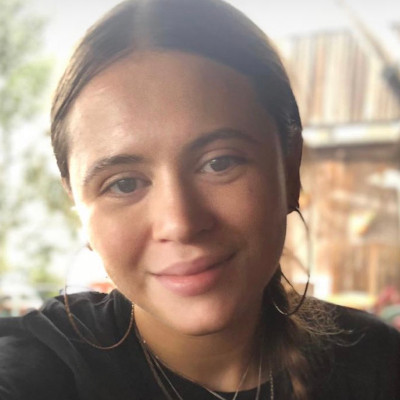 Born and raised in London. Naomi is a Freelance Stylist | Creative Director | Writer | Brand Consultant and the Fashion &amp; Features Editor-At-Large for Mission Magazine. The first philanthropic fashion publication. She developed vitiligo in her teens with it lying dormant for years before progressing drastically in her mid 20’s.

Born and raised in London. Naomi is a Freelance Stylist | Creative Director | Writer | Brand Consultant and the Fashion &amp; Features Editor-At-Large for Mission Magazine. The first philanthropic fashion publication. She developed vitiligo in her teens with it lying dormant for years before progressing drastically in her mid 20’s.

Don't miss the latest Vitiligo news right in your inbox

Don't worry we won't spam you or share your details.

This site uses cookies to provide you with a more responsive and personalised experience. By using this site you agree to use our cookies. Please read our cookie notice for more information on the cookies we use and how to delete or block them.