MY JOURNEY WITH VITILIGO: DESPAIR, ACCEPTANCE AND BECOMING A TRUSTEE

I have had vitiligo for the last 15 years. After suffering from eczema and psoriasis as a child and teenager, vitiligo first appeared as a small patch near my left eye. This then steadily progressed over the next few years until roughly 95% of my skin had lost its pigment. My progression to almost complete pigment loss was very difficult as I had lots of patches all over my body for a 3-year period which was highly noticeable. I was 19 years old and at university when it started, so as a self-conscious teenager I found this exceptionally difficult to cope with.

After diagnosis, I was provided with a corticosteroid cream (Dermovate) by my GP. This had no impact at all so after a few weeks I stopped using it to avoid any unwanted side effects. It was then that I started to feel quite desperate. My family has a history of skin conditions on my mother’s side, but never vitiligo before. My GP then referred me to the dermatology department at Guy’s and St Thomas’ Hospital in London where photographs of my entire body were taken as a reference point (sounds a bit strange now) and it was suggested that I try UVB light therapy. I made a personal decision that it wasn’t for me however I do appreciate that for many others in our community this treatment has worked and stimulated re-pigmentation to a greater or lesser degree. After discussing with my family, considering the vast scale of treatment required against the potential risks I decided not to pursue it. I did try camouflage make-up on my hands and face which was my only option, given the self-tanning market didn’t have the scale or quality of products, compared to today. The products I did try left my skin more orange than tanned so I gave up.

Reflecting now, this became the time I refer to as my ‘lost decade’. I hated my skin, and myself by association. Why did I have to be so different in a weird way? Literally no one else I knew had the same skin condition. I struggled with confidence and low self-esteem at the best of times, and this just seemed wicked and cruel. I had no coping mechanism or witty retort when someone noticed and didn’t know how to manage unkind remarks such as ‘ghost’ or ‘milk bottle’. It made life incredibly difficult.

I always found my vitiligo so difficult to explain. Summer was the worst time. At least during winter everyone else was a bit paler too. When I’d return home from a hot country, friends would often innocently make comments without thinking. This made me feel extremely embarrassed and often made me feel lost for words. I used to love the beach but I started to avoid meeting friends there. I’d avoid wearing sunscreen as a form of ‘protest’ as I hadn’t really needed it much before. Getting sunburnt sometimes provided a short relief from my pale skin as it was a ‘nice’ shade of red! All of this is utterly irrational but I can see now that it was part of my journey towards self acceptance.

Today, the only pigment I have left is on my face except for two large circles around my eyes. This is often mistaken for a ‘sunglasses tan’. I do have a small patch of pigment on my lower leg which actually tans very well! A more recent development has been patches on my scalp and in my moustache (if I grew one), turning the hair colour white. It wasn’t until quite recently that I was able to come to terms with my vitiligo and stopped feeling embarrassed. This has been after almost 15 years of hiding from it, not being able to talk about it with others and often feeling inferior.

Since I’ve started to ‘own’ my vitiligo, talk about it openly and not feel embarrassed to wear a t-shirt through fear of comments or stares, it has been liberating. I’ve found that even though most people haven’t heard of vitiligo, they either do not care that my skin is paler than theirs or hadn’t really noticed. Everyone I speak to is supportive and kind. Talking to people about my vitiligo has made me feel each person is then an ally, and that I can really relax around them, which is something I haven’t been able to do since I developed vitiligo.

So, what helped me turn the corner in my journey towards self acceptance? In December 2018, I was very lucky to have been able to travel the world with my wife after we took sabbaticals from our jobs. We spent 5 months travelling around Australia, New Zealand and South America. Our travels put my vitiligo on centre stage as I met lots of new people, and my skin tone was obviously different to most other people’s golden tans. It became a type of ‘immersion therapy’ and an opportunity to confidently have conversations with strangers who noticed or asked about my skin. There is no way I would have been able to do this when I first started to develop vitiligo 15 years ago, and to be honest not even a year ago.

Travelling was a very humbling experience. I already knew that I lived in a ‘bubble’ back in the UK but I really had no idea. The number of happy, kind and generous people I met, particularly in South America, who have a fraction of what most of us take for granted really resonated with me. It made me realise that there are a million people who would happily swap their problems for mine. I know it’s a cliché but travelling really did broaden my mind. It made me realise how fortunate I am and that the very least I can do is help others in any way that I’m able.

My experiences during my travels and how I felt about my skin when I returned home, lit a fire in me. I felt really empowered and realised I no longer felt embarrassed who I was. It was an incredible feeling. It has transformed me into a more confident, driven and happy person. But I also felt a sense of loss at the amount of time it had taken me to arrive at this place. I resolved to do something about this and decided to help others who are struggling to come to terms with vitiligo. I want others to love the skin they’re in a lot faster than I learned to love mine.

I first got in touch with the Vitiligo Society when I returned home in April 2019.  I joined as a member and also offered my services to support the society in any way that I could.  Shortly afterwards, I had a great conversation with Eyal and then also met the other trustees, Marco, Natalie and Simon at their offices in Victoria.  I was absolutely delighted to be invited to join the board of trustees and be part of this fantastic team. The passion and dedication of the trustees I have seen in my short time so far is truly inspiring.

I have 12 years experience in HR roles gained in the investment banking and energy sectors.  I am looking forward to dedicating time and effort to the Society to help us grow and raise awareness of vitiligo. With a number of exciting projects on the horizon, I can’t wait to see what the rest of 2019 and beyond will bring. 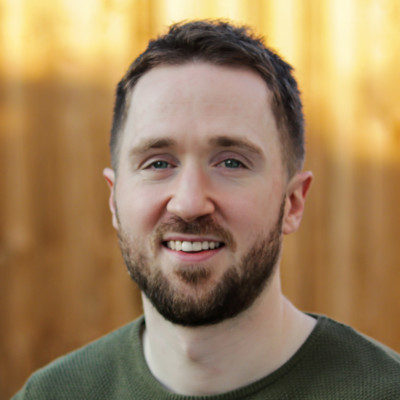 John became a member of The Vitiligo Society in April 2019 and shortly after was delighted to join the board of Trustees.

John has had vitiligo since 2005 and only in recent years has been able to speak openly with family and friends about it. John is very passionate about helping fellow sufferers on their own journey towards acceptance and supporting people to feel more confident in their own skin.

John is a HR professional with experience over the last 12 years in the Financial Services and Energy sectors. John lives in Woking, Surrey, with his wife Amy and miniature dachshund, Dot.

John became a member of The Vitiligo Society in April 2019 and shortly after was delighted to join the board of Trustees.

John has had vitiligo since 2005 and only in recent years has been able to speak openly with family and friends about it. John is very passionate about helping fellow sufferers on their own journey towards acceptance and supporting people to feel more confident in their own skin.

John is a HR professional with experience over the last 12 years in the Financial Services and Energy sectors. John lives in Woking, Surrey, with his wife Amy and miniature dachshund, Dot.

Don't miss the latest Vitiligo news right in your inbox

Don't worry we won't spam you or share your details.

Analytical cookies are used to understand how visitors interact with the website. These cookies help provide information on metrics the number of visitors, bounce rate, traffic source, etc.

Advertisement cookies are used to provide visitors with relevant ads and marketing campaigns. These cookies track visitors across websites and collect information to provide customized ads.